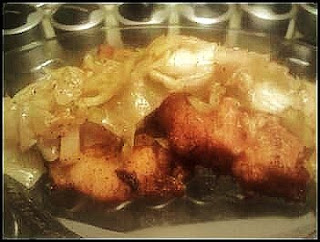 In a bowl whisk together flour, paprika, 1 tsp of Worshishire pepper and salt. Dredge the cutlets in the flour mixture and shake off any excess. In a large pan, add in 4 TBS of the EVOO and sautee the cutlets until browned on both sides. Absorb on paper towels and put in a large casserole or bake dish that has been drizzled with EVOO.

Shred the Cabbage and put it into the same pan with the left over oil.. Sprinkle with Salt and Peppers.
Sautee until softened and slightly browned around the edges. Add in the Apple Cider Vinegar and scrape
up all the brown pieces on the bottom.

Add the cabbage to the cutlets, arrange in one layer in the bake dish. Drizzle the whole dish with EVOO and the other cup of apple cider vinegar, more Worshishire pepper and salt, cover tightly with aluminum foil and put into a 300 degree preheated oven for an hour to an hour and a half.
No comments:

Search for Recipe or Ingredients

FACEBOOK MEMBER? COME AND JOIN OUR ORIGINAL GROUP PAGE TO SHARE AND COMPARE YOUR RECIPES AND IDEAS!

Check out these great RECIPE BLOGS!