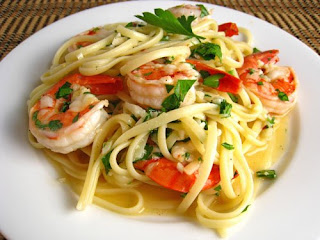 Cook pasta according to package directions. Meanwhile, in a large saucepan, saute the chopped garlic in the butter until browned.  Add in the broth, lemon juice, zest, salt, pepper, red pepper flakes and 3 tablespoons of the parsley. Bring to a boil.

Add shrimp; cook for 3-5 minutes or until shrimp turn pink. Drain pasta, toss with the shrimp mixture. Top with remaining parsley.
No comments:

Email ThisBlogThis!Share to TwitterShare to FacebookShare to Pinterest
Labels: My Own Recipes, pasta, Seafood 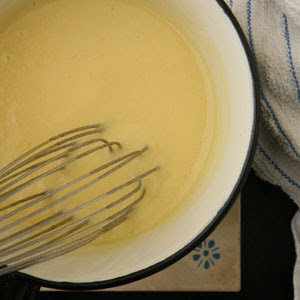 “Butter is essentially a smooth mixture of fat and water. The secret to making beurre blanc is to preserve its makeup by allowing each addition of butter to melt smoothly into the sauce, as you whisk it, before adding the next piece of butter. Also, never let the sauce come to a boil once the butter is added; that will cause it to separate. Some restaurant cooks add a little heavy cream to the wine reduction before whisking in the butter, to ensure a smooth and stable sauce. This recipe is based on one in Mastering the Art of French Cooking by Julia Child, Louisette Bertholle, and Simone Beck (Knopf, 1977).”


1. Have butter ready. Bring wine and vinegar to a boil in a saucepan; add shallots, salt, and pepper. Lower heat to a simmer; cook until most of the liquid has evaporated- reduced to ~1.5 tbsp. (If reduced too far, add 1 tbsp. water to remoisten.)

2. Remove pan from heat; whisk 2 pieces of butter into the reduction. Set pan over low heat and continue whisking butter into sauce a chunk at a time, allowing each piece to melt into sauce before adding more.

3. Remove sauce from heat; whisk in lemon juice. Taste and adjust seasoning, then strain through a fine sieve into a bowl. Serve with fish, poultry, or vegetables.
No comments:

Email ThisBlogThis!Share to TwitterShare to FacebookShare to Pinterest
Labels: Gravy and Sauces 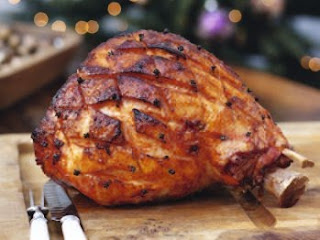 Submitted by: Mark O'Neill
This aromatic ham is great for anytime of year!

* Put all the ingredients, except those for the glaze, into a large pan, on the stove but off the heat, adding water until the ham is covered.
* Turn on the heat and bring to the boil, then turn down to a simmer and partially cover the pan. Cook for about 31/2 hours. (This may not seem long for a big joint, but as it will carry on
* cooking as it cools, and this is going to be eaten cold, I don’t want it overcooked. Nor do you.)
* Preheat the oven to 200°C/gas mark 6. Lift the ham gently out of the hot liquid, sit it on a board and let it cool slightly, not too much but just so that you can touch it without burning yourself.
* With a sharp knife, strip off the rind, and a little of the fat layer if it’s very thick, but leave a thin layer of fat. I love this work: it is peculiarly gratifying seeing the hot blubbery fat slither off. Use the same knife to score a diamond pattern in the remaining fat on the ham, in lines about 2cm apart. Stud the points of each diamond with a clove.
* Put the cranberry or redcurrant jelly, cinnamon, paprika and red wine vinegar into a little saucepan and whisk together over a high heat, bringing it to the boil. Let the pan bubble away, for about 5 minutes, so that the glaze reduces to a syrupy consistency that will coat the fat on the ham.
* Now sit the ham in a roasting tin lined with foil, as the sugar in the glaze will burn in the oven as it drips off. Pour the glaze over the diamond-studded ham, then put it in the oven for about 45 minutes, or until the glazed fat has caught and burnished. Take the ham out of the oven and sit it on a wooden board to cool (2–3 hours) before you carve it. You'll have to convert these ungodly metric numbers.
No comments:

Email ThisBlogThis!Share to TwitterShare to FacebookShare to Pinterest
Labels: Pork and Sausage 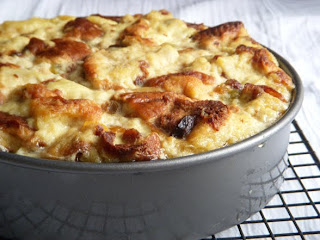 Recipe from: Barefoot Contessa.com
http://www.barefootcontessa.com/recipes.aspx?RecipeID=293&S=0
Prep Time: 20 min
Inactive Prep Time: 25 min
Cook Time: 1 hr 40 min
Serves: 6 to 8 servings
Ingredients
1 Italian panettone, about 1.2 pounds
Unsalted butter, for greasing the dish
3 extra-large whole eggs
8 extra-large egg yolks
5 cups half-and-half
2 teaspoons pure vanilla extract
2 teaspoons pure almond extract
1/2 cup sugar
1/3 cup sliced almonds
Directions
Preheat the oven to 350 F.
Trim the dark brown outer crust from the panettone. Cut the rest of the loaf in 1-inch cubes and place on a sheet pan in a single layer. Toast the panettone for 10 minutes, until lightly browned.
Grease a 9 by 12 by 2-inch baking dish with the butter. Place the panettone cubes in the baking dish.
In a large bowl, whisk together the whole eggs, egg yolks, half-and-half, vanilla and almond extracts and sugar. Pour this custard mixture over the panettone. Set aside for 10 minutes so the bread soaks up the custard. Scatter the sliced almonds over the top of the pudding.
Place the baking dish into a larger pan and add very hot tap water to the larger pan until it's halfway up the side of the baking dish. Cover the larger pan with aluminum foil, tenting the foil so it doesn't touch the pudding. Cut a few holes in the foil to allow steam to escape. Bake the pudding for 45 minutes. Uncover and bake for 40 to 45 more minutes, until the custard is set and the top of the pudding is light golden brown. Allow to cool for 15 minutes. Serve warm or at room temperature.
No comments: 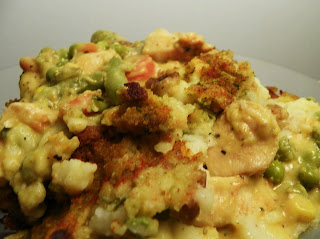 1 6 oz package of Stuffing Mix for Chicken
1 6 0z package of Instant Mashed Potatoes:
1-1/2 lb. boneless skinless chicken breasts, cut into bite-size pieces and sauteed in EVOO until browned.
1 can Cream of Chicken soup
1 can Cream of Mushroom soup
1 pkg. (16 oz.) frozen mixed vegetables, thawed, drained (or 2 cans of any vegetable of your choice)
1/2 TBs herbes de provence (or herbs of your preference)

Directions:
HEAT oven to 400ºF.
PREPARE stuffing and potatoes as directed on packages, set aside.
MIX all remaining ingredients in bowl, then pour into a 13x9-inch baking dish which is sprayed with butter flavored spray.  Top the filling mix with a layer of the mashed potatoes and the stuffing on top.
BAKE 30 min. or until stuffing is brown and crunchy.
No comments:

Search for Recipe or Ingredients

FACEBOOK MEMBER? COME AND JOIN OUR ORIGINAL GROUP PAGE TO SHARE AND COMPARE YOUR RECIPES AND IDEAS!

Check out these great RECIPE BLOGS!